My annual visit to China was as usual eventful and full of surprises.  The pace of change in China never ceases to amaze me and this time was no exception. Reports the economy in China is slowing are undoubtedly true but one should not underestimate the size and power of the economy here. The economy may be slowing compared to it’s historical double figure annual growth of recent years but it is still growing at levels Western economies can only dream of.

One area where this is very noticeable is housing. Everywhere you look you see construction sites with new housing developments.  This is most prevalent in China’s second tier cities more of which later.  But it’s the sheer scale of it which is staggering. To give you an idea recently I paid a visit to Nanchang, a modest second tier city with a population of 5 million and ranked the 40th city economically in China.  But those statistics do little to reflect the stature of this city located in central China and famous for being the site of the 1 August Nanchang Uprising 八一南昌起义 in 1927 in which the Chinese Nationalist party took control of Nanchang and subsequently went on to take control of the whole of China becoming the Communist Party of China.

I have visited Nanchang many times and on each occasion the change is noticeable and dramatic.  On this occasion it was perhaps the sheer scale of the construction that most caught my eye. As you drive around the edges of the city you see new housing developments springing up everywhere. I counted at least 20 on one such trip alone. A typical development may consist of anything from 12 to 20 high rise blocks some with up to 30 floors housing 50 – 80 apartments. Each with underground parking, gated access, waterfalls, fountains and landscaped gardens. This scene is duplicated many times as you drive out from the city centre in all directions and even in central city areas they are still demolishing old low rise apartments and replacing with modern new high rises. 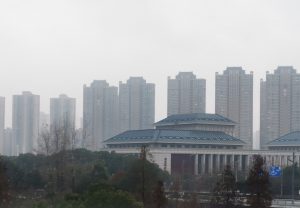 This is truly magnificent effort to increase housing and is all the more amazing when you consider it may take 2 or more years to sell all the apartments in a single block. This does not appear to reduce the appetite for developers to invest and build yet more tower blocks. Clearly both the government and developers take a long term view and are prepared to invest for the long term. 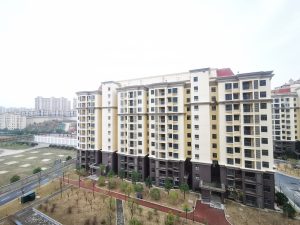 Housing is not cheap in China and is comparable to UK prices with a modest 2 bed apartment in a first tier city easily costing half a million pounds with some costing much more,  Even in second tier cities properties on the outskirts in less popular areas can cost £200,000 or more.  With average wages, for instance as a waiter in a restaurant, being around £400 per month it’s difficult to see how residents afford to buy property. The drive to buy your own home in China is strong however and many manage to buy with the help of parents who invariably will do anything to help their offspring have a better life.  Equally remarkable many manage to pay off their mortgage within just a few years.

Once you realise this scene is playing out in cities all over China one begins to appreciate the sheer scale of residential development in China.  This development is matched by a huge growth in infrastructure being undertaken by local and central government – more of which in a later article.

Homelessness and street sleeping seems extremely rare outside of the tier 1 cities and even in the very large cities it appears uncommon. Maybe it’s because the authorities simply don’t allow it, and maybe the strong family culture found in China acts as a protective net for the poorest in society, but one can’t help thinking it has a lot to do with the ready availability of housing.  Given the acute shortage of housing in the UK our government and developers could learn a lot from China.  High rises in the UK have historically had a bad reputation and even recently the disaster of Grenfell has done nothing to promote high rise living.  Yet when you look in China it works.  China is not a crowded country overall, but with the vast majority of the population concentrated in Cities these metropolises the developers in these urban areas face similar land shortages as we face here in the UK.

As a final thought one can’t help, given the vast amount of construction occurring, wondering if the developers will sell all the new property they are building and if there will be enough people to fill them but history suggests they will, barring a recession, which on the evidence I see, is very unlikely anytime soon.